I’ve spent a lot of time in France, including living in Paris for a brief while, and also living with a non-English – speaking French family at the age of 17. I love all things French and when the school to which my daughter goes started students in French in preschool, I was especially delighted.

While I’ve planned all kinds of events, I’m the first to admit that children’s party planning is not quite my “cup of tea” (pun intended).  But since my 8 year old daughter’s class includes only 4 girls in their 11 student second grade class, I thought I’d have a little fun with creating an experience for them that would be memorable and educational and hosted a Tea In Paris themed-birthday party for my daughter, Gracie. 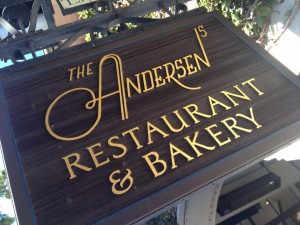 I chose Andersen’s  Santa Barbara for their High Tea.  They have been a Santa Barbara landmark for years and the Andersens do business the old-fashioned way:  more than just providing customer service, they provide the customer experience.  I made my reservation with Charlotte over a month ago and then stopped by in-person to go over details with owner Birte Andersen just a few days before the party and she made me feel like I was a VIP.  I told her I just wanted to confirm a couple of small details and she invited me to sit down at a table with her, offered me food and drink and made me feel like my event was the only one on their books and of the utmost importance to them .  At the end of our meeting, she reassured me that they were committed to making my daughter’s Tea in Paris birthday party a great success and with her warm hospitality, I had no doubts. 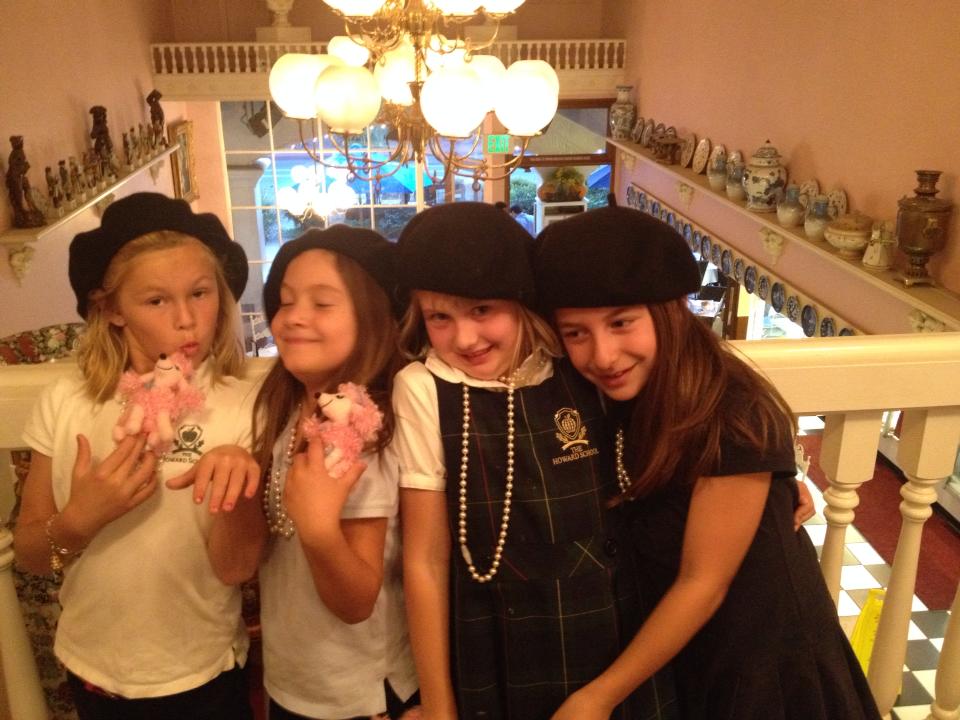 The day of the party, the girls arrived and had to find their placecards and stand behind their chair while the Hostess gave them a quick welcome (in French, of course) and orientation.  Tea is not just about the food and beverage, it is about proper etiquette.  We discussed how one does not take their seats until the Hostess has.  Once seated, they learned about how tea first got started and how to serve themselves properly (and be served).  Favor boxes includes pink french poodles, pearl necklaces, black berets and of course, white gloves.  Perhaps the biggest highlight was that their French teacher made an appearance and Tea in Paris also included some continued learning in French, ending with the birthday girl being sung to in both French and English.  The High Tea Menu included:  Scones (with clotted cream, jam, marmalade & butter), Apple Strudel, Small Sandwiches (that were actually more of a mini salad on a piece of bread- very unusual but gorgeous and delicious), Fresh Fruit, Petite Fours, Cream Pastries and all gorgeously and dramatically displayed.  Everything was fresh and sumptuous. 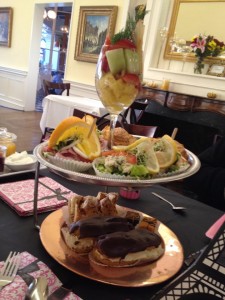 The girls loved exploring the elegance of Andersen’s (including their gorgeous private event dining spaces upstairs) and thought it was just fantastic.  And for me, just seeing the look on my daughter’s face was what it was all about.  It was magical to see all the girls engaged in some imagination, wonder, innocence, romance , giggles and awe.  All were in the spirit of it, speaking French when they could and even making up some French words just to have fun.

We will definitely return to Andersens– whether to enjoy a lovely meal or to book a private event upstairs in their private event space , which has gorgeous natural light and European charm, elegance and offers event guests a lovely choice of entrees from Filet Mignon,  Shrimp Pasta to Scandinavian Duck and more.

For now, however, I need to recover from my trip to “Paris” and eat a leftover eclair, which I’ve been saving for some downtime to reflect on how quickly my daughter is growing up. 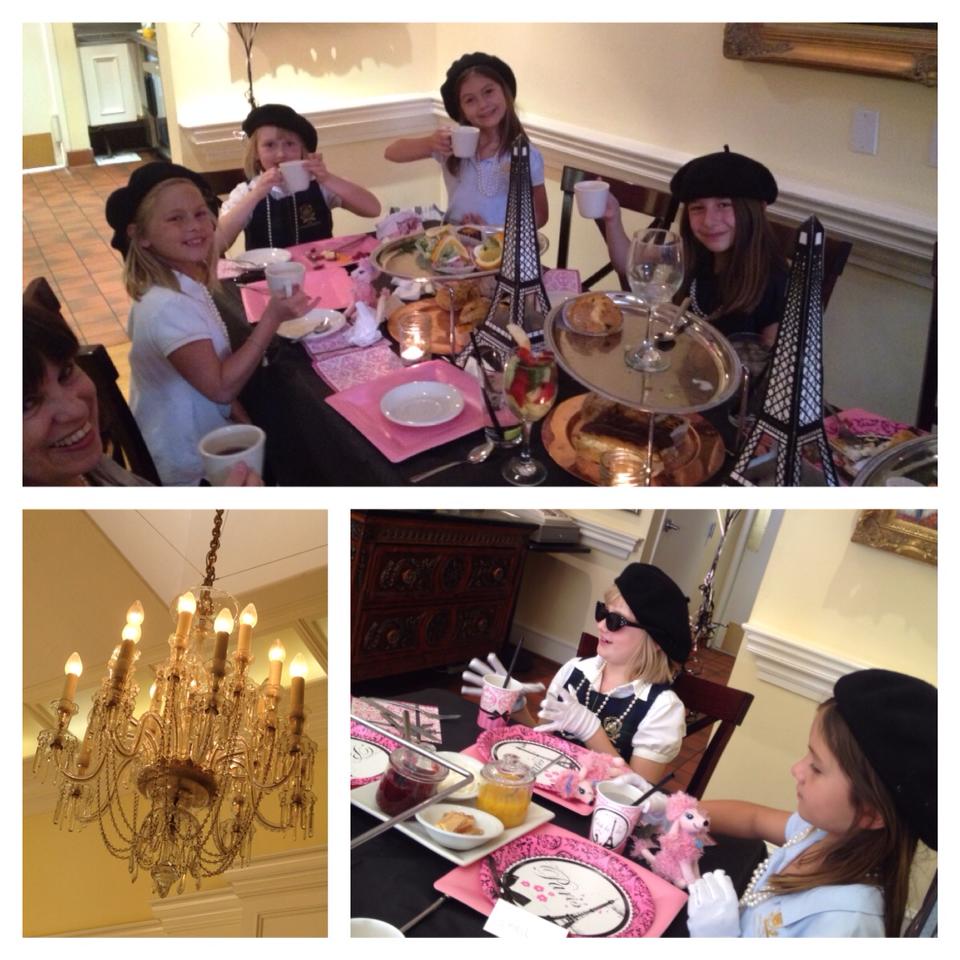 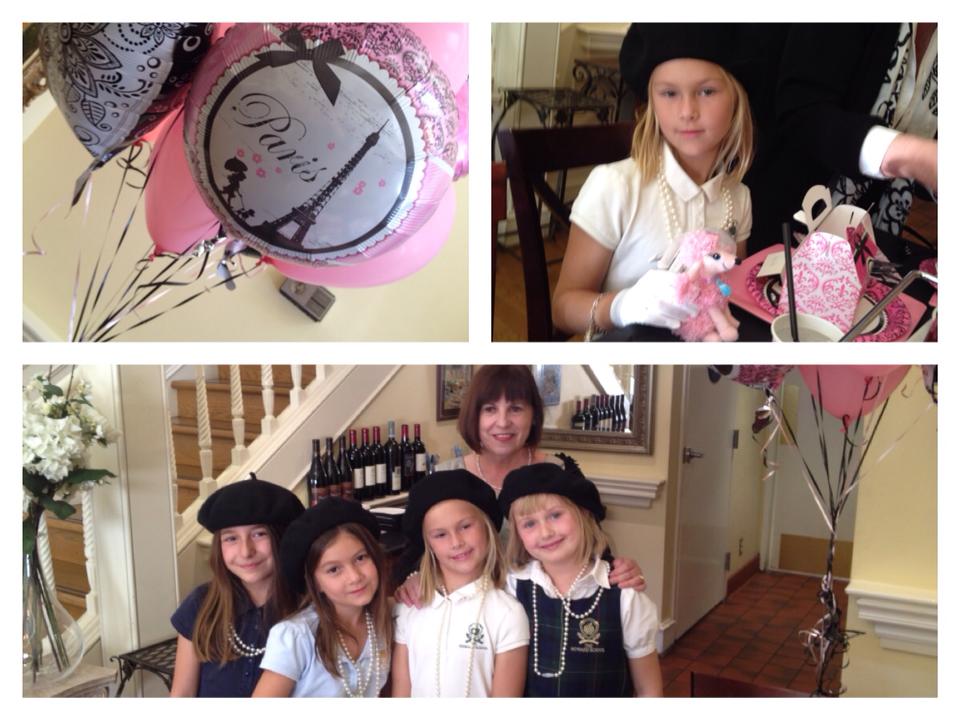 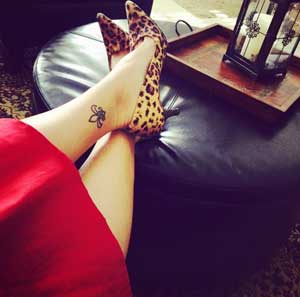