This post begins a series of “Tales from a Wedding Planner’s Lair” we will be featuring here on our BLOG and we are proud to announce is under consideration for a possible national column. This particular story’s content is particularly timely for Halloween Day because it is nothing short of horrific.  And the story goes something like this:

Once upon a time brides were blissfully happy to be engaged and were glowing at the thought of something very simple, but very profound:  they had met and were marrying the love of their life.  The only thing important to them was perhaps a beautiful wedding gown and marrying their sweetheart.  The end.

Over the years and 600 weddings later,I’ve noticed the “bride” has evolved.  And in many cases, not into something pretty (disclaimer:  with the exception of Santa Barbara Wine Country Weddings & Events brides, for whom we do a painstaking interview process and are 99.9% on target with our assessment). In some cases, it looks like the bride of “yore” is a rare find and we are proud to say that we do a lot to ensure that we have found said bride when choosing our clientele.  And here’s what it boils down to:  selflessness and manners.

Recently, however, I was contracted for some preliminary pre-wedding  planning assistance for a bride in Northern California.  Interestingly, I did not conduct my standard pre-hiring interview with this client, as it was a referral from some personal friends whom I know and trust.  One of the requested duties was to come see the wedding gown that the bride had chosen.  The bride’s Maid of Honor and her mother were going to be in town at the same time and she was so excited for me to come see her dress with them. 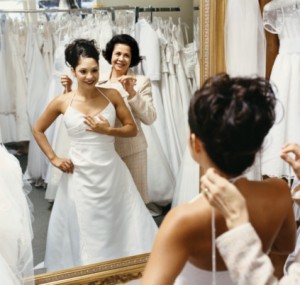 I arrived for a weekend of appointments and planning, ending with an appointment at the bridal shop on a Sunday.  I found out that the owner of the shop – an elderly Polish woman with a cast on her arm from a recent break- came in on a day the shop was normally closed to open it up just for my client to try on her dress.    She (the owner) of the shop took measurements and doted on my client while her Maid of Honor and mother looked on.  When I saw the price of the dress, I said to the Mother of the Bride, “That is an incredible value, and the owner is so helpful, I think you’ve found the one and I hope she buys it.”  The mother looked surprised and said to me, “Oh, we’ve already purchased her dress months ago – this same one, but at almost half the price.  She just wanted to show it off to her Maid of Honor while she was in town and this was the only way we could have her see her in it.”   After I picked up my jaw off the floor, I said to the mother , “Are you aware that this owner came in to open the shop on a day she is normally closed and thinks that you are a potential customer?”  She said no, she wasn’t aware.  But the bride had and did.  No one took into consideration that this hard-working bridal shop owner was so needing the business, she made a concession to come in on a day off – when her shop was closed- in the hope for a possible sale.  This woman does business the old-fashioned way: you work hard and do whatever it takes to keep revenue coming in.  You dote on and take care of your client.  You do whatever it takes to build a personal relationship with your client, because that’s what business is, but triply so in the wedding industry.  People buy people.  Especially for one of the most precious landmark days of someone’s life and one filled with so much emotion.

I was heartbroken for this precious bridal salon owner who came in on her day off and ashamed of my client for giving the impression she was a legitimate client.  My client continued to play the game and go through the motions and pretend she was a customer, asking all kinds of questions of the salon owner , making the salon owner even more attentive and solicitous, thinking that she was all the more closer to a booking.   I quietly excused myself and said I would wait outside for them.  When they came out, I told my client that I did not feel I was the right professional for them and did not hesitate to tell them- very calmly- that what had happened in there was nothing short of dishonest.  To this day, I can still see the look on their faces. I don’t know if they were shocked I was firing them or if they truly did not understand that what they had done was so, so wrong.  The reality was, in addition to how the bride behaved in this circumstance, I also allowed her to lapse severely behind in her payment schedule to me (and notifying her repeatedly of this) and that alone was breach of my contract, but as we all do sometimes, kept on anyway , trying to give her the benefit of the doubt.  So this act at the bridal salon was actually the perfect final straw.  The best indication of future behavior is past behavior.  And I’d seen enough.

It is rare I have to fire a client and thankfully I have an almost air-tight contract that actually lists why I may terminate a working arrangement , allowing me to do it in those rare circumstances.   But more than this, I am saddened by the bride who apparently lacks a moral compass and for the salon owner, to whom I send infinite blessings of abundance and 20 clients who book her in one day to replace the horrific experience that this last one was.

Now, for this one story of tragedy and selfishness, there are a million more of joy, light and giving.  We will be featuring a little bit of all of it – the good, the bad and the ugly- here in this series.

Please make sure you share and leave your comments!